Brembo Sensify brakes are nothing short of a small revolution

It’s easy to overlook a new braking technology called “Brembo Sensify”. On the surface, that name doesn’t mean much of anything. What this technology is for new car brakes, however, is nothing short of a small revolution.

When the brake pedal of a modern car is fully depressed, the brake pressure is distributed in the same way every time. Fluid is expelled from the master cylinder at all four corners, in turn compressing the caliper pistons and pressing the brake pads into the rotor, causing friction. At the surface level, this is what’s going on – obviously, things get a little complicated when Brake-by-Wire technology is introduced, but that’s also pretty normal compared to Brembo Sensify. As an indicator of how revolutionary this will be, brake fluid and brake lines become superfluous with Sensify.

The best way to understand what Sensify does is to provide an example. In an emergency stop situation involving new cars on the road today, you will activate the anti-lock braking system, otherwise known as ABS. It is a smart technology that was invented decades ago and has been improved upon ever since. The purpose is in the name. Instead of having to feel and press the brake pedal below the braking threshold to prevent the wheels from locking, the system takes care of you for you in a series of micro-pulses, continuously applying and reducing brake pressure on its right, bringing you to the most efficient stop and allowing you to maintain a semblance of steering control. Anyone who drives, especially in rainy conditions or in winter, has probably felt it in action. As soon as the ABS system is activated, the pedal starts pulsing; the ABS system makes its usual noises and eventually you stop. Hopefully.

All that song and dancing with ABS is totally superfluous with Brembo’s Sensify braking technology. In fact, cars with Sensify won’t even have systems like ABS or will have to leverage traditional systems we’ve used over the years to improve hydraulic braking systems like Electronic Brake Force Distribution (EBD). To tell you why in the most succinct way possible, that’s why this system is capable of applying and withdrawing brake pressure to any wheel independently of the other with a virtually instant response. It replaces all these innovations – ABS, EBD, etc. – we have done to improve hydraulic systems with a single new system that can do everything faster.

To use an analogy, Sensify is like hub motors for electric cars, but instead of acceleration control, Brembo has total control of deceleration. In the event of an emergency stop that would otherwise use ABS, the Sensify system is able to stop you using a wide range of sensors and a combination of new brake system hardware consisting of new caliper, brake “line” and activation brake technology. In a full emergency stop, these sensors are capable of sensing maximum tire performance and causing the brakes to apply the exact amount of pressure that provides the fastest stopping distance without the micro pulses of ABS. It’s smooth, calm and quiet cruising from whatever speed you are, down to 0 mph.

The mechanics of the system are even vastly different from today’s new car brakes and there are more configurations that Brembo offers. The most advanced configuration uses electromechanical grippers at all four corners. These calipers are driven by tiny electric motors that squeeze the pads onto the rotor when the brake pedal is depressed. The brake pedal in this case is essentially just an electric button, which sends a signal to an ECU which in turn tells the brake calipers what to do. There are no traditional brake “lines” here, and since an electric motor is used as an actuator, there is no brake fluid either. You may be wondering, where is the backup system in this setup in the event of a car power loss? Brembo says that vehicles with a full electromechanical braking system will be equipped with a backup power supply that will be used in such situations. 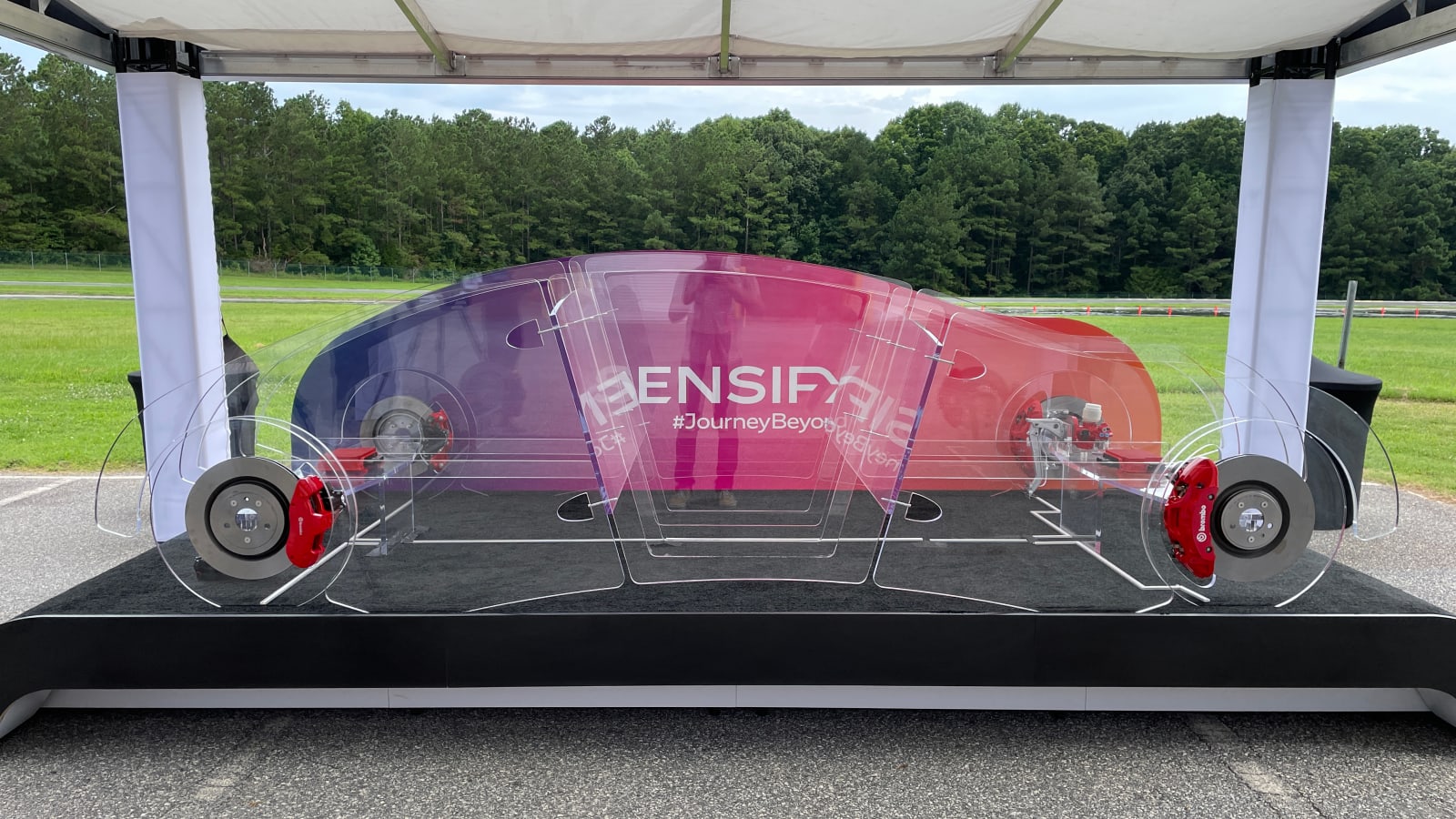 There is a hybrid system also available in the Brembo Sensify brake range. This system uses electromechanical brakes for the rear, but the front brakes are hydraulically applied. This traditional sounding hydraulic front system is also different from the usual, however, as each front caliper will have its own master cylinder. This creates two closed brake systems for each front wheel. Its mechanics are much more similar to the brake-by-wire systems found in cars today, but Brembo is still able to have complete and independent electrical control of each caliper thanks to the closed systems. As you’d expect, the front calipers use brake fluid.

The first emergency stop – and every stop thereafter – we made with the Sensify car was almost serene. Going from 0 to 100% brake pedal pressure in a car with traditional brakes always results in a screeching of the tires, ABS racket, and perhaps some drift to one side or the other as you attempt to stop the car. With Sensify, Brembo sensors aim to keep brake pressure at the point where you are using all the grip the tires can allow, without locking the wheels even for a fraction of a second. You are simply carried away by the speed of the freeway at 0 mph as if you are going for a leisurely stroll. When Brembo later showed us the computer data, the brake pressure graphs didn’t lie. Instead of constantly micro-adjusting brake pressure as would induce an ABS panic stop, the brake pressure in the Sensify car was even and consistent from start to stop. This was the case on both dry and wet pavement. 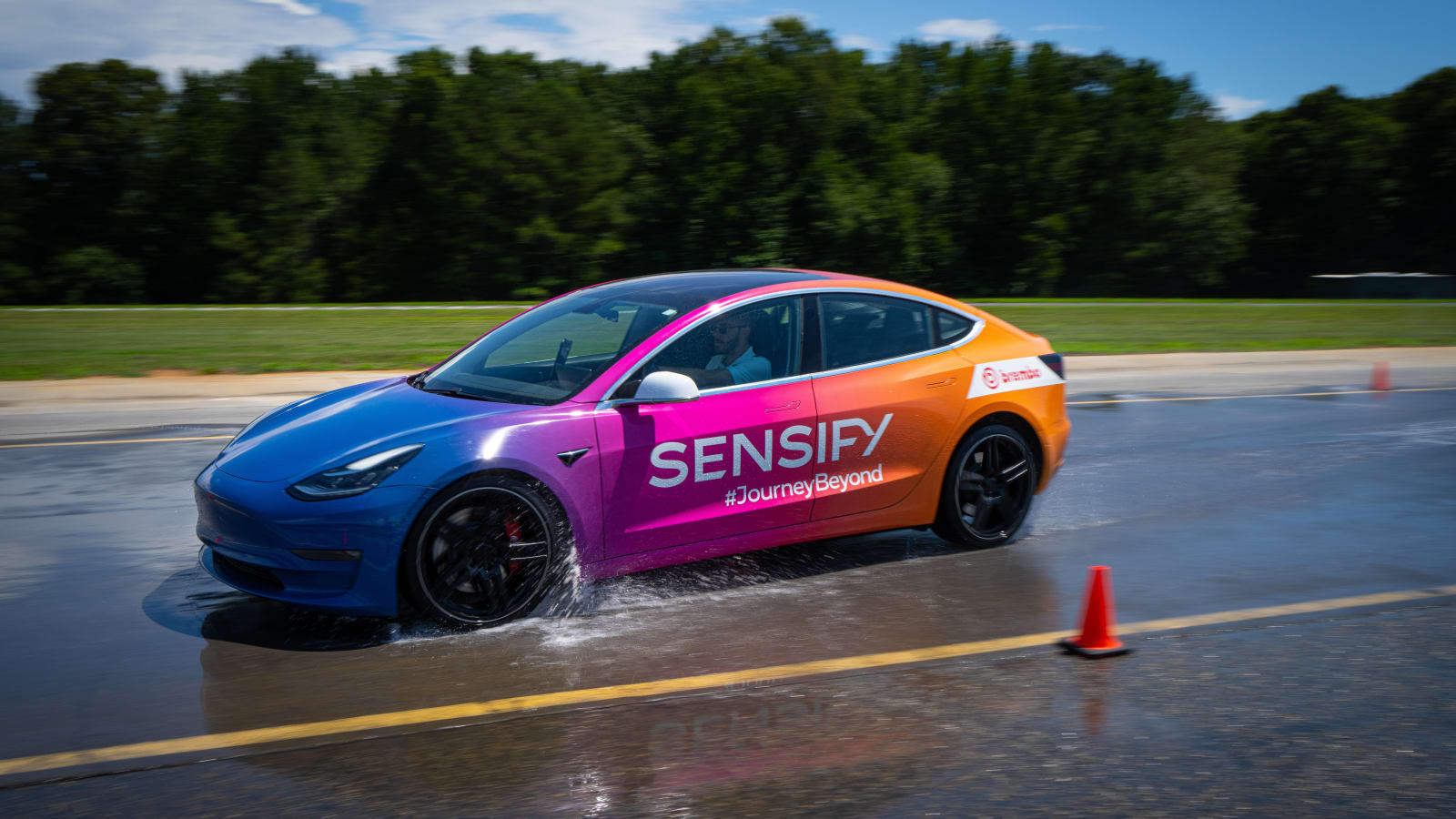 Mid-corner brake jamming is a recipe for disaster in many cases, and while the Model 3 Performance’s ABS system handled this obstacle with ease, the Sensify system did it even better. We were able to keep tracking our cornering trajectory without any problems and the computer did a great job of ensuring the car remained stable and predictable under hard braking. Even when you go fast enough for a touch of understeer to be the car’s first direction, it can be quickly remedied with steering force, aided by braking patterns. Brembo even intentionally made us upset the vehicle by applying maximum braking force at 75 mph in a corner, then pushing the wheel left and right. There wasn’t even a hint of a feeling of being out of control. After that stop, Brembo presented the data explaining that the car would swing brake pressure on the left rear brake and right rear brake individually with each tug of the wheel in one direction or another in an attempt to keep the car under. check. We will also note that all of these maneuvers were performed with the stability control completely defeated and in the “Track Mode” of the Model 3 Performance.

The last maneuver that Brembo launched at us was a quick left-right that had to be completed under hard braking from a fairly high speed. Once again, the Sensify car surpassed traditional braking Model 3 Performance in terms of both handling and control. Depending on the severity of the steering angle you apply when braking, the system will also help you with the tiniest oversteer to help steer the rear in a controllable way when cornering.

Brembo is not yet rolling out quantifiable improvements in braking distance to the wall, but the engineers say this is largely due to the system still being tested. An easier way to get better stopping distances from a car is to simply upgrade the tires. However, Sensify has many other positives besides extremely smooth stops and independent brake control. For one thing, it’s a big win in packaging, as it gives OEMs more freedom with their platform and electrical architecture design. It is no longer necessary to run the brake hoses throughout the car and the ABS system can be destroyed. Similar to today’s Brake-by-Wire systems, you can also adjust the braking feel and response. A “comfort” brake mode would leave you with a smooth and progressive pedal, while a “track” brake mode could provide a super stiff and sensitive pedal feel. 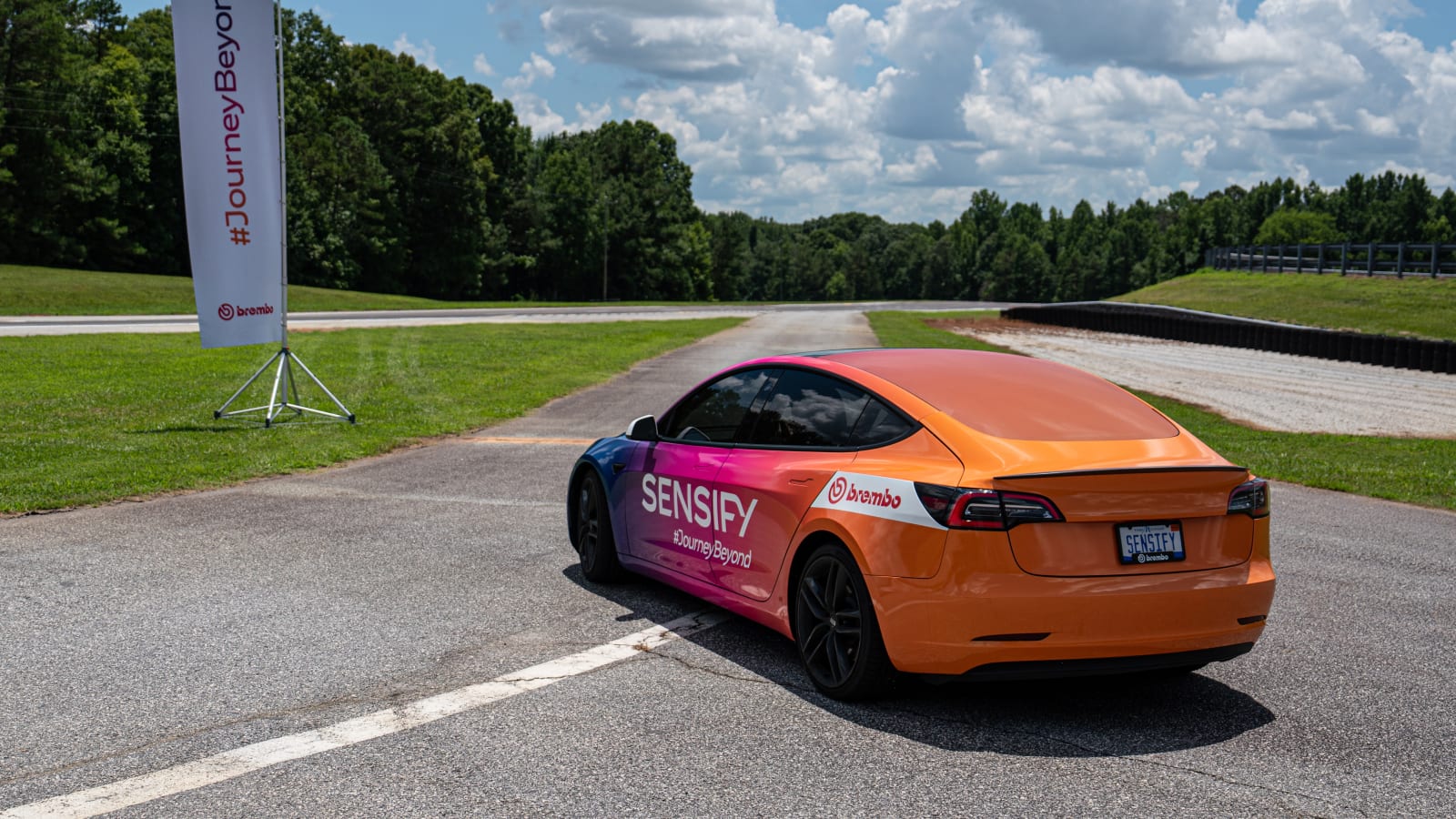 There are some great innovations when it comes to efficiency too. Brembo has designed a new spring for its electromechanical brake calipers that it calls “Enesys”, which is able to more completely remove the pad from the rotor when you are off the brakes, thus decreasing drag. This reduces rolling resistance, which is of paramount importance for the EV range. Plus, your sanitary pads will last longer. Another advantage for electric vehicles is the potential for regenerative braking: Brembo claims to be able to recover more energy with the Sensify brake system than with the traditional one. However, energy recovery is not without energy consumption, as you will need to use battery energy to run the gripper motors.

Total weight of the system is another zero-sum game. The added weight of motors, sensors and other components cancels out the weight loss due to the elimination of brake lines, master cylinders and other parts of the traditional braking system. That added weight is also in one place you really don’t want it: hanging on the wheel. This extra unsprung load of the electromechanical brakes is exactly why Brembo believes the best application for sports cars and supercars will be the previously described hybrid configuration which keeps unsprung masses similar to those of a traditional brake system.

Finally, and this is where a little skepticism is needed, Brembo says its electromechanical calipers are a lifetime part. Anyone with older vehicles will tell you they’ve gone through their fair share of calipers over the years, but Brembo says the only parts you’ll ever need to replace are the pads and rotors. Of course, the hybrid setup using brake fluid and short brake hoses at the front will also require brake fluid maintenance. Brembo says you can use any brake pad or fluid you want.

Once the Sensify braking system is available and on production cars, Brembo says it can update and “improve” it via over-the-air updates. We asked why a braking system should be updated and Brembo representatives told us it gives OEMs the opportunity to sell access to a tow brake package or track brake software package (or any package that they can invent) as an after-sales item. If you thought we were already entering subscription hell, just wait and see what comes next. As for when you should expect Sensify to show up in production cars, Brembo says it is working with a number of OEMs right now and that the first examples are slated for sale in 2024. As for which OEMs and which models , Brembo is amazed as it finalizes the Sensify tuning.